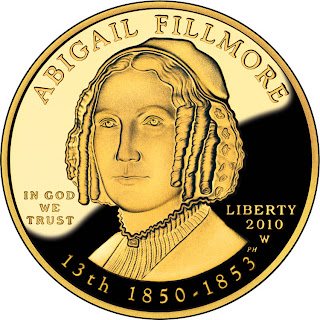 Abigail was born in Stillwater, New York, 1798, in Saratoga County, New York. She was the daughter of the Reverend Lemuel Powers, a Baptist minister, and Abigail Newland-Powers, Abigail grew up in Moravia, New York, not far from the Fillmore farm. Her father died shortly after her birth. Her mother moved the family westward, thinking her scanty funds would go further in a less settled region, and ably educated her small son and daughter beyond the usual frontier level with the help of her husband's library.

In 1819, she took a teaching post at the new academy in New Hope, where her oldest pupil was 19-year-old Millard Fillmore. The world of knowledge and Fillmore's steady progress in it drew them together, and gradually the relationship of teacher and student evolved into romantic attachment.

After a long courtship, Millard, aged 26, and Abigail, aged 27, were married on February 5, 1826, by the Reverend Orasius H. Smith at the home of the bride's brother Judge Powers in Moravia, New York. Without a honeymoon, they settled at East Aurora, New York. Mrs. Fillmore continued to teach school until the birth of her first son and maintained a lifelong interest in education. She shared her husband's love of books and helped build their personal library.

Attaining prosperity at last, Fillmore bought his family a six-room house in Buffalo, New York. Enjoying comparative luxury, Abigail learned the ways of society as the wife of a Congressman. She cultivated a noted flower garden; but much of her time, as always, she spent reading. In 1847 when Fillmore was elected New York State Comptroller the family temporarily moved to Albany, New York; their children were away in boarding school and college.

In 1849, Abigail Fillmore came to Washington, D.C. as wife of the Vice President; 16 months later, after Zachary Taylor's death at a height of sectional crisis, the Fillmores moved into the White House.

Even after the period of official mourning, the social life of the Fillmore administration remained subdued. Pleading her delicate health, she entrusted many routine social duties to her daughter, "Abby." With a special appropriation from Congress, she spent contented hours selecting books for a White House library and arranging them in the oval room upstairs, where Abby had her piano, harp, and guitar.

At the outdoor inaugural ceremonies for Franklin Pierce in 1853, she caught a cold and the next day came down with a fever. She developed pneumonia and died just 26 days after leaving the White House, on March 30, 1853, at the Willard Hotel in Washington, D.C., the shortest post-Presidential life of any former first lady. She was buried at Forest Lawn Cemetery in Buffalo, New York. The memorial stone was placed by the Abigail Fillmore Chapter, National Society Daughters of the American Revolution, of Buffalo.

On February 10, 1858, five years after her death, her husband married Mrs. Caroline Carmichael McIntosh, a wealthy Buffalo widow. They remained married until Millard's death on March 8, 1874.


The Congressional Evolution of the United States of America

Presidents of the United States of America

Capitals of the United Colonies and States of America

Book a primary source exhibit and a professional speaker for your next event by contacting Historic.us today. Our Clients include many Fortune 500 companies, associations, non-profits, colleges, universities, national conventions, PR and advertising agencies. As a leading national exhibitor of primary sources, many of our clients have benefited from our historic displays that are designed to entertain and educate your target audience. Contact us to learn how you can join our "roster" of satisfied clientele today!

Primary Source exhibits are available for display in your community. The costs range from $1,000 to $35,000 depending on length of time on loan and the rarity of artifacts chosen.

No Taxation Without Representation

US Bill of Rights

*Republican Party - - is a defunct political party organized by Thomas Jefferson and James Madison in 1791. The Party went out of existence over the schism between John Quincy Adams and Andrew Jackson (both Republican candidates) over the Presidential election of 1824. Today, for the sake of expediency, political scientists incorrectly refer to it as the Democratic-Republican Party. Party members throughout its existence never utilized the name “Democratic-Republican.”

*** President of the Confederate States of America